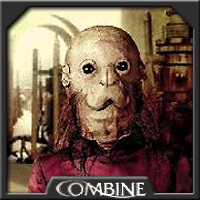 The Nimbanese are a humanoid race has hairless, walrus-like heads with stringy reddish beards and lacking tusks. A single member of the species is called a Nimbanel. The Nimbanese race is reptilian, but has a warm-blooded metabolism. As a race, they are regarded as arrogant and snobbish, but they place great value in knowledge and ethics.

Native to the planet Nimban, they evolved from herbivorous creatures faced with increasingly resilient plant species. They have become highly adept at solving complex puzzles and questions, and turned to mental battles when many races would have initiated wars. The Hutts regularly employ Nimbanese as accountants and negotiators.