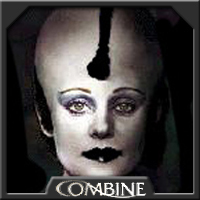 The Qiraash are a race of near-humans with large cranial cavities. With a brain capacity about 25% larger than other races in the Galaxy, the Qiraash are generally self-assured of their superior intelligence. They are typically nomadic, living in small communities throughout the Outer Rim with some concentration on Qiraa, though it is unknown where their true origins lie.

Qiraash resemble fair-skinned humans, but they are set apart by their larger skulls. Though mostly bald, they will typically have a narrow band of hair growing upward from the nape of their neck. When worn long, Qiraash often braid or style their hair into elaborate coifs. Though slightly smaller in stature, compared to other humanoid races, the Qiraash have a higher muscle density with average physical strength.

Known for their logical thinking and savage habits, the Qiraash also have superior survival instincts, which many argue border on precognition. Following these impulses can compel the Qiraash toward actions which may seem irrational to outsiders. While there are few records, and no reports of incidents within living memory, it is commonly believed that Qiraash will go so far as to eat their own offspring when they sense that their community is becoming overcrowded. Despite the potential for brutal results, the race's penchant for cool logic, decisiveness, and heightened instincts, have given them a reputation for mastery in the arts of subterfuge.