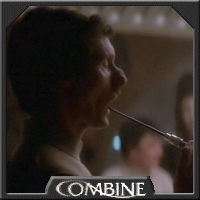 The Anzat race is a unique species in the galaxy as they do not exist in a similar fashion to other species. They are ancient, rumoured to be one of the first to ever roam the galaxy. With the average Anzat reaching 1.7m in height, they look almost exactly like humans, except they do not have a biological rhythm. They live off the life essence of other sentient beings, which is referred to as Soup or Luck.

They access the essence through prehensile proboscises they keep coiled in pockets in each of their cheeks. They are predators who mesmerize victims through a telepathic mind control, which gets stronger the closer they are. Habitually the Anzati stalk their prey and corner them. The extraction of soup begins when they uncoil the proboscises, insert them through the victim's nostrils, and then attach to the brain. Some Anzati are known to keep their prey alive for future feedings. The need for this is believed to be related to the fact that the planet Anzat cannot sustain life.

This drive to fill the void for soup is something that consumes the Anzati way of life. Some Anzati regard other species as cattle and a meal, while others try to control their needs.

They do not reproduce often and their parents do not name their offspring. Anzati often adapt human names to blend in with their surroundings. Youthful Anzati reach puberty at approximately one hundred years of age and leave Anzat to hunt for soup. This soup gives the Anzati race a perceived form of immortality, seemingly never succumbing to old age, able to sustain life for over a thousand years with little resemblance of aging. However, as the Anzat ages, the urge for soup grows, often resulting in isolation from their peers, self-destruction and increased feedings.