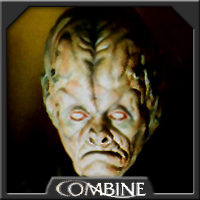 The Siniteen are a humanoid race that are characterized by their huge craniums, which are ridged and convoluted as if their brains were directly under their skin. They also have incredibly pale skin and pupil-less eyes. The lack of pupils causes most other races to mistrust the Siniteen since it is nearly impossible to know which direction they are looking.

The Siniteen have incredible mental abilities, and can process huge calculations in their heads; therefore, they have great skills with computers. They have even been known to calculate hyperspace jumps without the aid of a navigation computer. Because of this ability, the Siniteen are invaluable members of the testing team for prototype starships as they can plot jumps to a safe haven if the navigation computer breaks down. Furthermore, because of their very developed brain, the Siniteen are a very emotional race; it is not hard to upset a Siniteen, but, on the other hand, making them laugh isn't that hard either. Overall, they are known as a very compassionate and sociable people.