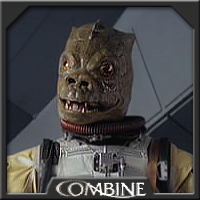 Trandoshans, who refer to themselves as T'doshok, are large, bipedal reptilians known for their ruthless warrior culture. Like most reptiles, Trandoshans are cold-blooded and possess scaly skin that they shed every year. Their orange, supersensitive eyes can see in the infrared range, and they are able to regenerate limbs until they reach middle age. Each of their limbs have three digits with sharp claws. While these claws are excellent for fighting, they aren't very dexterous, making Trandoshans clumsy in certain situations.

This species is extremely violent. Their culture is based on hunting and tracking beings less powerful than themselves. They were one of the first species to ally themselves with the Empire, and were the ones who suggested to the Empire using Wookiees as slave labour. When the Empire took over the Wookiee homeworld of Kashyyyk in the same system as Trandosha, the Trandoshans assisted the Empire by hunting down Wookiees that escaped.

Trandoshans worship a female deity known as the Scorekeeper, who awards Jagannath points to Trandoshans based on their success or failure in the hunt. Jagannath points, which refer to the spoils of victory won in mortal combat, are accumulated throughout a Trandoshan's life. Those hunters possessing more points enjoy greater status in society and are considered valuable mates by most females. At death, a Trandoshan presents his points to the mythological Scorekeeper, who determines his place in the afterlife by his merits.

When Trandoshan males have proven themselves successful in the hunt, they return to their homeworld to mate with a convenient 'clutch mother.' These arranged relationships are not considered binding. Once a couple has mated, the female lays her eggs and watches over them until they hatch. From infancy the males are trained as warriors and are shown the many different methods of hunting. As soon as they are old enough, they go on their way into the galaxy to start scoring points for their goddess.