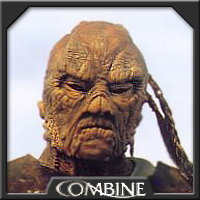 The Weequay are a race of humanoid aliens which are characterized by the topknot of hair which sprouts from their heads. The number of braids one has seems to indicate rank, although many xenosociologists claim the number of strands is meant to indicate the number of Sriluur years a Weequay has been away from his homeworld. Weequay have gnarled, coarse skin which allows them to blend in with, and survive in, the deserts of their native planet, Sriluur.

Among other Weequay, they have the ability to communicate using pheromonal discharges, but they only seem to work within individual Weequay clans. To other races, they are simply smelly beings. In general, Weequay do not have individual names. They are a quiet, dangerously violent race by nature, and have often found employment as soldiers, guards and mercenaries for the Hutts.

The Weequay people have lived on Sriluur with the Houk people for many years, but the racial tensions between the two races have erupted several times into all-out war. The Weequay prefer to remain low on the technological scale, and worship the moon which orbits Sriluur and its god, Quay. The name 'Weequay' means 'follower of Quay.' The Weequay appease their god by sacrificing a large beast after battling it. The beast most often sacrificed is the bantha. One of the most interesting things about the Weequay is their written language, which is formed from stones woven into long braids of hair to create symbols and characters.