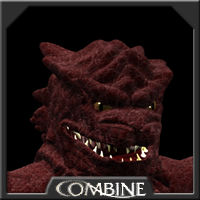 The Barabel evolved from a vicious reptilian species and maintain their hunting culture. On average, they stand 2 meters tall and weigh around 130 kilograms. Jagged, overlapping, black keratin scales cover their bodies protecting them from bites, blaster bolts, and radiation, and the Barabel are said to be able to shed their tails when necessary. Due to the planetary harsh radiation, they are forced to hunt at night and their eyesight has adapted, allowing them to see perfectly in utter darkness.

They also have a layer of fat that retains heat, so they fight well in both sun-baked heat and freezing cold temperatures. Barabel are famously mean-spirited. This normally manifests itself in direct physical confrontation, but Barabel have no qualms with property destruction, traps, indirect fire, or even crueler tactics.

Outsiders often confuse Barabel viciousness with stupidity, though that is a foolish mistake, and often their last.