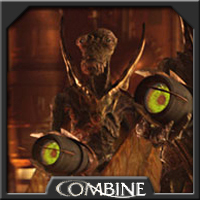 Geonosian society is based in a system of segregated castes which have evolved over many thousands of years. The more privileged elite rule legions of workers that work in large swarms and live in total submission. Violence is common in Geonosian society, as are frequent internal disputes over power. Geonosians divide up their castes according to intelligence and physical attributes. The winged beings are divided into two main classes - aristocratic and warrior - both of which can fly. A third class, the wingless worker drones, work in the planet's industrial foundries. These Geonosians do not possess weapons or take part in battle.

Through a selective breeding process and a series of systematic genetic modifications, Geonosians have managed to mold their castes around the different roles each is expected to perform. Warriors, for instance, have been biologically adapted to a warlike existence. They reach maturity very quickly, and at the age of six they are ready to fight in combat. Their main physical difference is in the wings they use to levitate - or even fly - for short periods. The warriors are tough and determined. They work well together in large numbers, and make devastating attacks with sonic blasters. Drones are the lowest caste of Geonosians and have a clearly defined function as labourers. But despite the radical separation of castes, the Geonosians live in close proximity in hive colonies that extend for miles underground.

The upper structure of these hives can be seen protruding from the planet's surface in the form of rock spires. These immense, organic-looking towers appear to be naturally occurring but are the result of much hard work by the species. The points where the spires taper towards the top make for useful look-out posts for Geonosian sentries, ready to sound the alarm in case of attacks from rival tribes or other predators. Indeed, their architecture is probably the Geonosians' greatest achievement. On a bright day, beams of light shine through fractures in the rocks which illuminates the inner structure of the Geonosian hives. The remarkable forms of these living spaces are sculpted in a rock paste consisting of stone powders mixed with excretion from the phidna parasite. Phidna are, in fact, specially cultivated in hydroponics gardens for this purpose. Although the upper classes in the hive disdain the lower castes, Geonosians of all classes can be found at the execution arena, enjoying violent displays such as sending prisoners to the beasts or one on one combat to the death. Given the enjoyment of violence that partially unites the Geonosians, it is surprising that they do not have their own organized army.