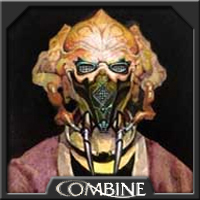 The Kel Dors are a race of aliens who have highly developed sensory organs and a natural aptitude for perception. They hail from a world named Dorin, whose position between two black holes gives it a radically different type of atmosphere, one that would be toxic to most beings. The species travels off world often enough that a Kel Dor with a breathing mask is not such an uncommon sight. The sophisticated pair of goggles and breathing mask are required for any Kel Dor who leave their homeworld to filter out oxygen atoms, which have proven to be most dangerous to the Kel Dors. Kel Dors are attentive almost to the point of being conspicuous, however their odd behavior is mild in comparison with other alien species.

Kel Dors tend to be relatively quiet but attentive, waiting in the wings and learning as much as possible before jumping into a situation. They are often said to possess a power that allows them to see all issues in black and white. They usually press for quick, simple justice, even if that means placing matters into their own hands. They are generally cooperative and helpful, but like any species they have their flaws. They are sometimes seen as nosy, but then the next moment their perceptiveness provides them with wisdom and insight into almost any situation.

The majority of Kel Dors are regular-sized beings, typically a little larger in build than other species, but what they lack in physical strength they make up for in perceptiveness. They have skin of varying tones, from orange to red, even blue and green, whom of which the society states as blessed. They are typically around 1.6-1.9 meters in height. Their external sensory organs can sometimes have a frightening appearance, with all the lumps and coils on their head, and their breath masks can be quite intimidating.

The other subspecies of Kel Dor are the warrior Kel Dors. Though they are a minority of the population, their involvement in the culture is colossal. They share the basic attributes of the normal Kel Dors, except for their physique. Though remaining relatively the same height, their bodies and muscles can reach to be twice the size of a normal Kel Dor, making them a most formidable combatant. Their heads seem to remain the same size, giving them an unproportional look, which too many races can seem quite humorous. Though, seeing the warriors in battle will quickly wipe the smirk of any person. The Kel Dor warriors, given their enhanced strength combined with the Kel Dors' superior hand-eye coordination and quick reflexes, are very fierce fighters.

One of the greatest mysteries of the Kel Dor race is their enlarged, external sensory organs, which allow them to interpret basic external stimuli as well as extrasensory input. It is said that these organs are the cause of many of the Kel Dors' magical powers. These powers include the famed ability to enter other beings minds, giving them a telepathy skill that is both feared and envied by species all over the galaxy.

The Kel Dors are usually brought up to be outstanding fighters, yet they are a most peaceful race. Physical violence is usually a final alternative, but when it is needed the Kel Dor excel in it. A youth Kel Dor is usually sent to the Dorin Academy at an early age. There, the child spends a majority of his or her childhood studying martial arts, ground tactics, and other means of warfare. Though, as they adapt their physical skills, they continue to push for knowledge of the mind, studying mathematics, philosophy, mechanics, and other useful subjects.

A strong part of Kel Dorian culture was the granting of Guardianship. The Guardians were an elite group of the wisest and most talented warriors of the Kel Dor. Often a Kel Dor noble had to prove himself worthy on numerous occasions, and be popular enough for the monarchy of that time to notice him or her. Actions to prove worthiness varied from settling minor disputes among traders to leading groups victorious in battle. The normal process for Guardianship started with a current Guardian presenting and sponsoring a Kel Dor noble to be granted Guardianship before the monarch of Dorin. If approved, the monarch usually proceeded to arrange an interview with the nominee before making the final decision. If he or she was approved, a large celebration was normally arranged after the ceremony. Upon naming the Kel Dor a Guardian, they must swear an oath of allegiance to the monarch as well as to follow a standard code of living, which was called the Code of Gallantry. Once named a Guardian, the skilled craftsmen of Dorin usually constructed a custom-made sword for the new warrior, which were called Guardian Rapiers. The sword was a symbol of their heritage, as well as an elegant weapon.