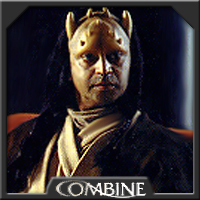 This near-human species had several sub-species, each of which was distinguishable by the vestigial horns which ringed their heads. They are known for their ability to withstand great amounts of pain. The Zabrak races were native to the planet Iridonia, although were one of the first to introduce interstellar travel, and thus are widely spread around the galaxy.

Considered something of a headstrong species, they are independent and capable - yet prone to biting off more than they can chew. A hardy species that can take a great deal of stress, both inner and outer, xenobiologists have varyingly tried to tie this trait to different strands in the Zabrak genetic makeup, but it seems every few years another one comes along that disproves the one before it.

Their culture is nominally broken into eight major colonies, and each Zabrak is said by Iridonian law to belong to one of them. However this is often muddied by the interbreeding brought about by their great travels across the galaxy, and today it is not uncommon to find a Zabrak who claims membership in as many as five of the different colonies.