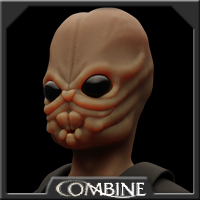 The Bith are a race of pale-skinned aliens with large skulls and long, splayed fingers. Their ancestral origins are hard to discern, because their bodies contain no trace of anything but Bith information. They have evolved into a race which excels in abstract thinking, although they lack certain instinctual emotions like fear and passion. Their huge eyes lack eyelids because they have evolved past the need for sleep, and allow them to see in minute detail. The thumb and little fingers on each hand are opposable, and their mechanical abilities are known throughout the galaxy.

They are native to the planet Clak`dor VII in the Mayagil system. They quickly developed advanced technologies, among them the use of deadly chemicals for warfare. A planetwide toxicological war between the cities of Nozho and Weogar - based on the disputed patent rights to a new stardrive - destroyed the once-beautiful planet, and left the Bith the choice of remaining bound there or expanding to the stars.

Immediate survivors were formed to build hermetically-sealed cities, although they quickly realized that it would better preserve their race to travel among the stars. Bith mating is a less than emotional experience, as the Bith race has lost the ability to procreate sexually. Instead, they bring genetic material to a Computer Mating Service for analysis against prospective mates. Bith children are created from genetic material from two parents, which is combined, fertilized, and incubated for a year.