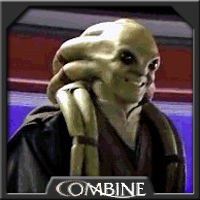 The Nautolans were one of two races that evolved on Glee Anselm. They are an amphibious race, which prefers to live underwater. The nature of their home probably accounts for their unusual body strength (scientists have pinned this down to them adapting to underwater pressure) and tails growing from their heads. These headtails actually contain many olfactory receptors, which grants the Nautolans a wide variety of abilities, from an increased sense of smell to the ability to detect pheromones. Other abilities have been hinted at, such as being able to detect changes in body chemistry, but none of these claims have been proven. However, due to the fact that these head tails were developed for underwater usage, they are not as effective on land. The longer a Nautolan lives on land the less effective they become.

When explorers first discovered the planet Glee Anselm and the Nautolans, they thought that they had found another branch of the Twi'lek DNA, however further tests found that the Nautolans were actually native to the planet.

The Nautolans were active participants in the galaxy up to and including the Clone Wars and the period there after. With the founding of the New Order however, the Nautolans were subjugated like many other alien races. They choose simple compliance rather than risk destruction and death. However, with the rebellion growing, more and more Nautolans are openly moving about the galaxy.