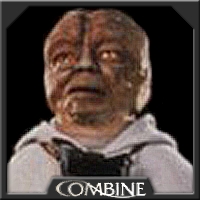 The only sentient race indigenous to the planet Dressel, the Dresselians are thin, hairless humanoids with elongated heads and heavily-wrinkled skin. Because of the masses of wrinkles on their faces, "outlanders" often referred to them as "prune-faces," a moniker which Dresselians consider derogatory and highly offensive.

Dresselians are generally fiercely independent, highly valuing personal freedom. Due to this fact, their government is a loose coalition that is determined periodically by popular vote. Their independence also plays a fairly significant role in their interactions with the rest of the galaxy, as they tend to be isolationists and usually opt out of the larger galactic meetings unless specifically encouraged by their Bothan neighbors to attend.

The Dresselian language, Dresselese, has been described by galactic linguists as being somewhat primitive. Due to the fact that they have had a considerable amount of interaction with the Bothans, who initially discovered the Dresselians around 200 years before the Galactic Civil War began, Dresselians speak using many borrowed words from Bothese. Most of the borrowed words are for items which are considered more technologically advanced than those the Dresselians had created themselves.

Prior to the Bothans discovering them, Dresselians were no more than hunters and gatherers who foraged for food in the wild; the Bothans chose not to interfere with the Dresselian culture at that point. In the span of roughly 200 years, however, they had advanced to an industrial-level in many areas, using steam for power production and black-powder type weapons. It has only been within the very recent past that Dresselians have been introduced to space travel and the technologies associated with the modern galaxy.

The majority of Dresselians never leave the planet's surface, preferring the comforts of home to traveling the galaxy. Those who have left Dressel, however, are considered by many to be ideal for trailblazing and scouting. Because of their preferred isolationist nature and the fact that being alone for weeks or months at a time is considered a pleasure, they are often employed by mining companies and military groups to do surveying, reconnaissance, or other field work.