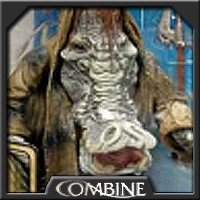 Despite their appearance, the Chevin are a technologically advanced, carnivorous species belonging to the pachydermal family. The species originated on Vinsoth, a world of rolling plains, with arctic polar regions, and few deserts. The Chevin have thick, wrinkled gray skin that provides a thick hide of protection, and the ability to regulate their body temperature. The Chevin stand around 2.5 meters on two thick legs that support their bulky frames. They have large heads, which support a trunk that stretches down to the ground. This trunk allows the Chevin to forage for food while watching for predators. Though slow, the Chevin evolved into good, calculating hunters. They hunted in groups, and circled their prey until it was caught by one of their advanced traps. Their culture has forged the species into a greedy one. Chevins are infamous for their lust for money, power, and status. They will accomplish their goals by any means necessary. The Galaxy has come to see Chevin as gamblers, smugglers, blackmailers, and gun runners. They are also notorious as slavers for manipulating the humanoid race of Vinsoth, the Chevin.

Although the Chevin are capable of using weapons of destruction, they tend to let others do their dirty work, or just force their slaves to do it for them. Though technologically advanced, the Chevin did not research their technology. They acquired it from an unknown off-world source, and adapted it to their lifestyle and needs. As a migratory species, the Chevin once walked the plains of Vinsoth. Now with technology, most travel the world on large community platforms, similar to the Ithorians and their herdships. The destitute Chevin tend to employ ground vehicles with wheels, rather than the repulsorlifts that wealthier Chevin put to use. While the Chevin travel on the platforms, the slaves walk and are expected to keep up.