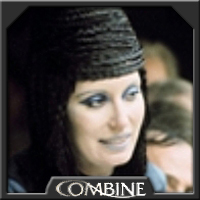 The humanoid Kiffar were very much an isolationist society until relatively recently, having been too preoccupied fighting amongst themselves to develop interstellar technology. Only when happened upon accidentally by a galactic survey team were they drawn into the affairs of the greater galaxy. Since their introduction to other species, their relationships with them have been less than friendly, and often outright hostile. Their nature of assuming that other humans who look vastly different from themselves are part of a different tribe -- and likely hostile -- played a big part of this.

Throughout their history, the Kiffar have placed distinguishing marks on their faces and other exposed parts of their body so that they can be easily distinguished from members of other tribes. Though the practice has become somewhat less popular in recent years following the massive strides towards peace between the tribes, Kiffars who venture offworld generally adorn themselves with these distinguishing marks so that they will know when they encounter another of their tribe, letting them know that this person is one to be trusted, and indicating the same to that person.

The Kiffar are known to be fierce warriors without regard for their own life, riding into battle upon the backs of indigenous animals with only bladed weapons and slugthrowers. This dedication to the cause of the tribe has made them popular mercenaries and bounty hunters in their home system, insuring justice throughout Kiffex.