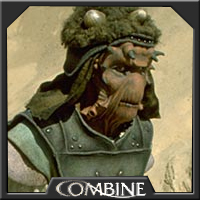 The Nikto are a humanoid species that have varying appearances. The many Nikto have been classified as different subspecies, but the true difference is only in color, how many horns one has, and how large its frill is. In general the species can be orange, blue, green and even red. Some sport frills on their cheeks, and some of those even have horns rimming the ends. Overall the species is very diverse, which led to some separation in culture due to the tendency in sentients to stick with those who are most like themselves. Its because of this factor that in Nikto history the species divided itself into five different sub-species. They were divided as such; the Red Nikto, Green Nikto, Mountain Nikto, Pale Nikto, and Southern Nikto.

This division led to the growth of different cultures, and even today this division is more than just "skin deep" to the Nikto. But this is a barrier that they have overcome. The species was able to unite together and overcome their differences shortly before the Hutts made first contact with them, and then helped the Nikto become a spacefaring species.

Religiously, their kind has had a cult oriented sacrificial religion base. And these different cults rise and fall in popularity as each new discovery the species makes influences their beliefs. The sacrifices they once made are now no longer a part of their religion, as they have been able to mature past that, as they did with coming to cope with the species' diversity.