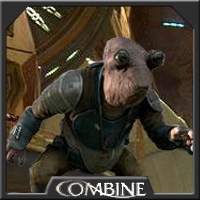 One of two species native to the sinkhole world of Utapau, the short stocky Utai have pale, hairless skin and two glassy black eyes which are well adapted to see in the darkness. Their hands have four fingers and their feet have two toes. They are usually laborers or tamers in the sinkhole cities and caverns of their homeworld. Utai society exists in a symbiotic relationship with that of the tall Pau'ans.

The Utai lived alone along the walls and crevices of the Utapu sinkholes, they domesticated wild beasts and were hardy enough to venture the bottom of the sinkholes grottoes to get water for their aquacultural projects. But an anomaly in the weather conditions forced the Pau'ans underground to live among the Utai, instead of warring they each saw what the other could offer: The Pau'ans were able to manage intergalactic affairs and introduced wind power to the Utai, who in return provided water, food and domesticated beasts for labor or transportation.

Unlike the Pau`ans, the Utai are more practical and don't involve themselves in diplomatic or governmental matters nor venerate family ties. Perhaps being too smart to take part in such messes, they prefer their simple lives.