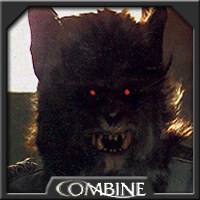 The Defel are a short lupine species from the high gravity planet of Af'El which is under constant bombardment of ultraviolet lightwaves. Averaging between one and one-and-a-half meters in height, the species has thick light-absorbing fur and red eyes that, in normal lighting, appear to glow. Their fur's absorption effect causes them to appear black in most lighting situations, not unlike a shadow. However, under ultraviolet light conditions such as on their homeworld, Defel fur displays a wide variety range of colors such as yellow or even blue. As they age, their fur loses the ability to absorb light and eventually they no longer blend with shadows, with the color even changing from its distinct black to a dull brown in normal lighting. With their ability to see in the ultraviolet spectrum, the species is nearly unrivaled in their ability to see in the dark but is blinded by other forms of light, requiring custom visors to protect their vision.

The hostile atmosphere and violent storms of Af'El require the Defel society to live underground, sharing resources vital to survival. The close confines and reliance on each another have created an honor system that the entire species lives by. The breaking of one's word is unforgivable and oath breakers are exiled from the community. Life underground has allowed the Defel to become experts in mining, developing highly sophisticated methods of tunneling and retrieving ores.

Although most Defel avoid off-world travel, many can still be found throughout the galaxy. They are primarily seen in vocations utilizing their biology or cultural expertise, ranging from mining corporation advisors to stealthy criminal enforcers, using their shadowy fur and red eyes to blend with the darkness and strike fear in their victims.