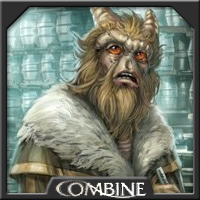 Gotals are large, mammalian bipeds with two cone-shaped protuberances on the tops of their heads. They have grey-brown, coarse-skinned faces with raised brows set over red-tinted eyes, flat noses and mouths filled with sharp incisors. Their fur tends to be varied in coloration but is usually a redish brown or other earthy tones. Nevertheless, white furred Gotals have been reported by the Galactic Xenobiological Society. Despite having eyes, a nose and ears, these sensory organs are primitively developed compared to the cones, which can detect and sense signals most beings will never be aware of without mechanical assistance.

What is interesting about their physiology is that although they are great hunters on their homeworld, they are in fact primarily herbivores. While they have the digestive tracts to digest well cooked meats of certain qualities, their blunt teeth are designed for processing flora. The Gotal themselves have a unique set of senses. This is due in part to the electromagnetic radiation from Prindarr and Antar and because of the concentrations of magnetite in the crust of their homeworld, Antar 4. This has had a profound effect on the species and the cones of the Gotals heads are filled with nerve endings and receptor cells especially adapted to detecting fluctuations in magnetic fields, infrared radiation, radio waves, neutrino bombardment, and practically any form of energy emission.

The Gotal have put their cones to many uses, although most often they monitor each other's subtle electromagnetic fields for clues as to desires, thoughts, and emotions. By utilizing such an ability, they can easily avoid angering, or even irritating, one another. Among themselves, Gotal speak aloud to convey abstract ideas, but never to express emotions, and, because the Gotal have no need to express emotional content with their speech, their vocal cords speak only in monotones. For this reason they can appear emotionless to other species at first glance, especially for individuals unfamiliar to their race.

Their cones are sensitive from the moment of birth and they are entirely helpless until they learn to filter out the overwhelming amount of input they can sense. After this time, approximately one standard year, the babies begin learning about life in earnest. Gotal walk by the age equivalent of two standard years, talk by three, and mature at 12. However, until they are mature, they are usually upset, irritable, and often develop certain psychosis under the barrage of emotions and other senses they are exposed to. When they learn to filter these emotions, they become remarkably stable and mature.

They have also developed one of the few societies which successfully exists in peaceful anarchy. Because of their sensitivity to the feelings of other members of their society, they have no need for government or law. This sensitivity has also served them well in mating and rearing young. Because they read each other so well, they have eliminated the more elaborate courtship rituals common amongst other species. Love at first sight is the rule rather then the exception in Gotal society, and the relationships based on this love usually last. Gotals mate for life and bear children as soon as their lifestyle permits.

However beneficial it might seem, sensitivity to so many forms of energy input can be hindered in some situations. Gotal senses become overloaded in the presence of droids or other high-energy machines, and this fact has kept the Gotal from extensively utilizing many modern technological advances, as well as from developing them. They are able to possess any skill relating to the use of advanced, energy based technology, but they prefer to specialize in other, unrelated skils. For this reason it is extremely rare for a Gotal to possess any skills involving droids. When at all possible, they prefer to use archaic technology over modern electronics, preferring hydrocarbon powered automobiles to landspeeders, and chemically powered slug throwers to blasters. They are happiest on the more primitive planets, where they can retreat into the quiet of the wilderness.

Because of their proximity of Antar 4's five companion moons, the Gotals were relatively proficient in the complexities of space travel even before their discovery by explorers of the Old Republic, establishing colonies on four of the five planetoids, and mining the fifth. A curious fact about the technology of the Gotals is that it is primarily based on chemical reactions that do not produce large amounts of electromagnetic radiation.

Gotals have spread themselves throughout the galaxy and can be found on almost every planet possessing a significant population of non-humans. They have found employment in mercenary armies and as members of planetary armies, where they make excellent point men on combat teams, as they are rarely fooled by sophisticated traps or camouflages. They also make excellent bounty hunters and trackers. They have also made a name for themselves as counsellors and diplomats, using their enhanced perceptions to help other beings cope with a wide range of psychological problems and situations. They can often anticipate tension and mood swings, not to mention misinformation.

Males tend to be larger than females, who are usually slimmer and posses smaller sensory horns. While females of this species tend to have an impressive array of hair on their heads, males usually develop medium sized manes that cover the back of their head and neck to around their upper jawline. They grow to a size equal to standard human heights and proportions and exhibit a scent usually classified by most humanoid species as being like rich earth. This, like so much of their other biology, is assumed to be a product of their homeworld and hunter like abilities.

Many individuals are uncomfortable in the company of the Gotal claiming that they can read minds. While this is not accurate, it is true the Gotal can use data received from their cones to make educated guesses as to what activity levels in certain areas of a creature's brain might mean. Of course, this ability makes them formidable opponents in business, politics, and gambling, and it is rumored that the finest gamblers in the galaxy learn to bluff by trying to trick Gotal acquaintances.