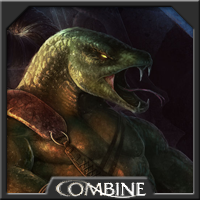 The Sluissi are a serpentine race, with a muscle-bound tail providing the lower half of their body, while a more humanoid torso with two arms finishes their structure. Their hands have four fingers, of which one is opposable. As with less sentient serpentine creatures, they can use their forked tongues to smell their surroundings. Their skin is covered in scales that can be a range of colours, with the brighter, more flamboyant being rarer.

Patient and calm even under extreme pressure, they work methodically and according to protocol rather than taking esoteric measures. This tends to infuriate other sentients who think they are not giving events their full attention. This insistence on taking their time, as well as their natural knack for tinkering with mechanical components have led to their being known as some of the best starship builders in the galaxy.