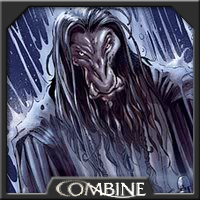 Whiphids are most noted for their thick tusks and large, hairy bodies. These features often make a terrifying first impression on other beings. In addition to sporting talons on the three fingers and three toes of each limb, they grow up to 2.5 meters tall with weights up to 400 kilograms. But while physically imposing and blessed with great strength, Whiphids are also known for being cunning and smart, able to use their natural tracking and survival skills to prosper in locations far from their native world.

Toola, the Whipid homeworld, is an ice-covered planet with few edible resources, which has forced the species to develop vital skills in hunting, tracking and wilderness survival. Their bodies also provide protection against the planet's coldest months with a thick layer blubber to insulate internal organs. This subepidermal layer combined with their water repellant fur, makes the Whipid's hide hardier than most species. Skilled and durable, they have become known as fearsome predators in the galaxy at large and, even in their rugged native environment, many Whipids survive well into their 250th year.

Whipids often display curiosity towards space-faring races who visit their planet to trade for ice. Their relatively sophisticated language, consisting of around 6,000 words, has expanded considerably since making contact with other species.

Most Whiphids live together in self-supporting tribes of three to twenty mated pairs. Tribal settlements are situated in close proximity to hot springs, wherever possible, but change with the seasons. During the winter season the tribes follow migratory ungulates such as the caraboose and motmot, while sheltering in tents made from animal hides and the bones of larger prey. In the warmer months, they gather at traditional locales where sturdier buildings of stone and packed soil are used.

Tribal hierarchy is based on not just strength and vigor, but on the leadership skills needed to conclude a successful hunt. Each tribe elects an elder called a spearhunter, who chooses the best sites for setting their camp and decides which prey to hunt. Spearhunters are those individuals most likely to rise to positions of leadership and influence when off-planet, aided in no small part by their size and strength.

Some Whiphids have also been known to display a unique healing ability sometimes called a "healing trance." When faced with fatal wounds, they assume a comatose-like state which can be as brief as a few minutes, or last as long as a day or more. The Whiphid emerges from the trance with their wounds healed by an internal process not well understood by the scientific community.
« Back To Top