Often found among the personal belongings of Force users, holographic chronicles, or holocrons for short, are organic crystal-lattice devices which store massive quantities of data. They are usually programmed with a gatekeeper - an artificial personality often patterned after the creator of the holocron, and meant to safeguard the device's contents. Most holocrons contain instructions on Force techniques or historical information about the universe, while others contain the journals of their owners or other important data. Sith holocrons represent some of the first examples of holographic chronicle technology seen in the galaxy, although it was quickly adopted by the Jedi and other force-users throughout the galaxy.

Sith holocrons often contain a gatekeeper embedded with consciousness of an important Sith Lord that may or may not be the creator of the device. Over the centuries, Sith holocron gatekeepers have acquired a malevolent reputation for attempting to, and often succeeding in manipulating and corrupting the weaker-willed Force-sensitive beings that access them.

Externally, Sith holocrons are immediately distinguishable from other devices - most often pyramidal in shape, engraved with Sith characters, and having a distinct dark presence. Internally they work similar to all other holocrons; Force users may interact with the gatekeeper, but only those sensitive to the dark side of the Force may access the contents. They are alleged to create tremors in the Force upon activation and take a significant amount of willpower to manipulate without affliction. Jedi inexperienced at handling Sith holocrons often report feelings of sickness or dizziness merely by looking at them. 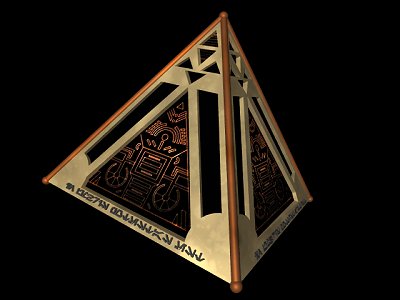