The Sysat T-24 satellite is a militarized version of the basic Sysat T-20 reconnaissance satellite. Although four intermediate iterations proved critically flawed, the T-24 delivers the ideal balance of features for those whose desire for real-time system coverage outweighs anything so mundane as a price tag. Although at the same 10-meter length it shares its predecessor's small profile and ease of deployment, the T-24's 40 percent larger volume (and far greater production costs) provide a substantial array of upgrades.

Most notably, the K7 omnidirectional sensor package makes the T-24 eight times as sensitive as the T-20, allowing it to provide the same level of detection at eight times the distance and a better chance to identify hard-to-detect objects (including those employing electronic countermeasures) at closer ranges. While this allows fewer T-24s to cover a wider area, a denser formation also allows multiple satellites to triangulate otherwise anomalous signals, potentially overcoming ECM with multiple simultaneous scans. The T-24's onboard communications package interprets IFF data transmitted by each target (if any) and relays it to any receiver in the satellite's network.

The BNH communications suite employs a frequency-hopping technique to ensure lossless data transmission. The T-24's own sensors identify frequencies with minimal traffic. A single, low-data "trunk channel" allows networked satellites to compare their results and select whichever frequency has the least traffic across the star system at any given time, allowing them to transmit high-resolution data on that channel without interference. As ships or other electromagnetically active objects pass through or near the system, the network re-optimizes in real-time to minimize latency.

Articulated solar panels and an improved power system provide the Sysat T-24 twice the ionic capacitance of the T-20, but developers regarded this marginal gain as incidental, rather than an intended upgrade. Enhanced as it is, the Sysat T-24 remains subject to the same fundamental weakness as its predecessor. Despite a doubled hull rating, reflecting better internal reinforcement, the T-24 still lacks armor, shields, or any defensive armament. While collisions with meteors and other space debris are of less concern, the T-24 is an easy target for any hostile entity. 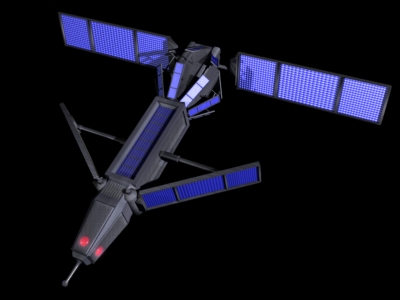