A vessel that is considered outdated today, the Consular-class Cruiser was a revolution in starship design when it was originally introduced. The Consular-class is a Corellian design that was first produced during an age when all other starship designs were elegant and companies were more concerned with the appearance of the ship. The Consular-class, on the other hand, was built on a completely utilitarian design, nothing fancy, only functional. During those days, there was no standardized communications net, thus the Consular-class is equipped with a wide range of dish and communications antennas, designed to be able to pick up any form of communication in the galaxy. The purpose of this was to give the diplomats using the ship, or the traders if the ship was used for commercial purposes, the ability to communicate with any species or culture that it encountered. This was also the first ship to use an ion generator ring that ionized ignited fuel prior to the turbine injection, a feature now common in almost all of the starship engines in use in the galaxy today. Just below the cockpit of the ship, there is a so-called salon pod, that is interchangeable. This was done to accommodate the various types of alien physiology in the galaxy. At the time of production, there were many different kinds of salon pods available, but since the ship is now considered outdated by many spacers, it has become increasingly hard to find these pods. They were fitted with their own sensors and life-support systems, so they could be ejected from the main ship in an emergency and sustain the passengers for a considerable period of time in deep space. 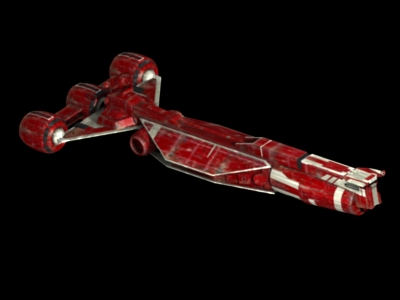