The Storm Trooper Belt was designed by the Galactic Empire after the First Galactic Civil War to make better use of space around the waist. While lighter than their predecessors, these belts can hold a variety of larger items in better-designed compartments which allows for greater versatility and less movement inhibition.

When carried by Imperial troops, these belts usually contain grappling hooks and high-tension cabling, extra power cells for the E-11 Blaster Rifle model, rations and spare comlinks. Among the other gear, including but not limited to medikits, bacta patches, and a small toolkit to fix damaged portions of their armor. While these items filled the frontal compartments, each belt contains energy sinks located near the hips to protect the wearer from the energy of blaster fire. These sinks would also draw the energy away from the sensitive electronic equipment inside the other pockets, including the usual thermal detonator attached to the rear of the belt.

Storm Trooper Belts are part of the standard fitout of Imperial troops and as such are most commonly see worn by the white-armored Imperial stormtroopers. The equipment carried by each stormtrooper is strictly standardized, with certain missions requiring modifications of the original design for improved performance. Although the belts are produced under Imperial contract, strictly for Imperial use, many sets of armour have found their way into the greater galaxy either through theft or sale by previous Imperials or deserters. 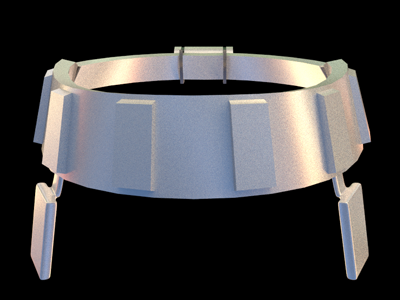