Macro binoculars are handheld optical instruments which allow the user to view objects from afar and are possibly the most widespread surveillance device in the galaxy. While the most common models are capable of extending one's sight up to several miles, from a good vantage point, high-quality models have proven effective at much greater distances.

Often consisting of durable but lightweight materials, with properties similar to plasteel, macro binoculars feature a standardized internal display providing live measurements of distance and relative elevation. In many models, the partially-digitized viewscreen allows for limited record-and-playback capability. Most macro binoculars are effective in both well-lit and dark environments, but some emphasize one or the other.

Due to their obvious tactical applications, several macro binocular variants have been produced with soldiers in mind. These models offer increased durability, added visor compatibility, and integrated helmet support. The added features address concerns about unexpected equipment failure on the battlefield and allow users to utilize them in tandem with protective headgear.

While undeniably useful, macro binoculars lack the digital image enhancement capabilities of electrobinoculars, which are widely considered the superior product. However, macro binoculars' relatively inexpensive manufacturing process ensures that they remain widespread. As a cheap and effective means of long-distance observation for civilian and paramilitary users, macro binoculars are predicted to remain a common sight in the galaxy for the foreseeable future. 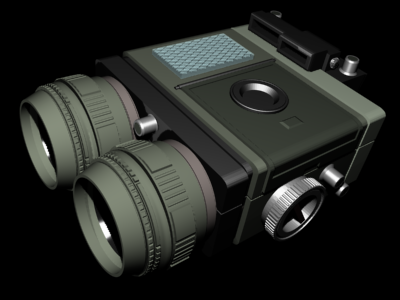