Following the conclusion of the Great Sith War, the Republic Navy commissioned the design of a "Generation Tomorrow Starfighter" to help give the Navy an edge over the Galactic Republic's enemies. First built by the Republic Fleet Systems, the Aurek Tactical Strike Fighter was designed to serve as both an interceptor and light attack fighter, and served with distinction in both roles. After initial testing proved successful, the Aurek replaced the aging and quite limited fighters used by the Republic at the time.

The Aurek introduced a number of novel concepts in starfighter design, some of which were so advanced that they were later included in both the Delta-7 Aethersprite and the RZ-1 A-Wing Interceptor designs. The inclusion of a hyperdrive was a revolutionary idea at the time; it allowed the fighter to operate without capital ships, giving the Republic an edge over all other navies at the time. The variable-geometry delta-wing design and powerful sublight engine system allowed the fighter to reach incredible speeds while maintaining exceptional agility for its time. The Aurek's design was also extremely efficient, keeping running costs relatively low for a ship of its caliber.

However, armed with only two heavy lasers and meager shields, the Aurek was known more for its speed than its sting. Since it was unable to inflict significant damage on larger and [well defended] ships, the Aurek was primarily used in squadron formations, keeping strength in numbers while the pilots attempted to harness their crafts' speed to defeat foes during dogfights. Despite its drawbacks, the Aurek still preformed effectively during its entire service history.

While now outclassed and out dated in its fighting potential, the Aurek is still one of the fastest fighters in existence. For this reason, the Aurek still manages to find a role to play in both government and private sectors; they are often seen performing reconnaissance flights, private transport, or even system defense for more impoverished organizations. This was helped by the Aurek's ease of production, allowing a number of navies to sell off their aged and damaged fighters. 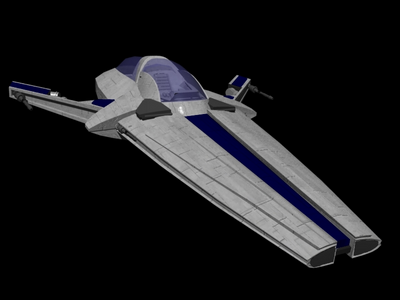