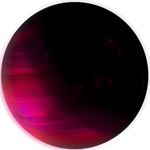 Wreathed in a multitudinous array of husky reds and playful shades of pink, the gas giant Maltha Obex's atmosphere, which it owes largely to a dense copper core, provides a refreshing change from the dull greys and dirty browns of most gas giants.

Located far from the fiery conflagration that is the sun N`oka Brath, which itself lies on the fringes of the solar system, temperatures on Maltha Obex range from highs of a brisk to frigid chill to lows of unearthly coldness in the depths of night. Arctic weather and a gaseous environment is an unfortunate concoction of extremes that has birthed an ecosystem unable to support a wide variety of life. Yet in spite of this, some species have found ways to flourish, or at least survive in the extreme climates of the world. Species such as the squid-like Beldon and Velker, which feed upon them, have found ways to adapt to the environment. The planet core itself, however, is only sparsely populated by amoeba and other simple organisms.

Tourism to Maltha Obex is currently non-existent, however unorthodox types have been known to go to and from the planet on a regular basis. The standing population is rather slim, only people that need to be on the planet would consider staying there, or people that want to conduct business far out of the public eye. What may be the future for this relatively unspoiled planet is unknown, however, experimentation suggests that local vegetation such as the Coona Cilatta, could be used in the creation of high-grade narcotics.

Year 22 Day 318: A new treaty was established on Maltha Obex today between governing officials and diplomats from Black Sun; these documents formalize the transition of power to becoming a protected territory of the government, a move largely embraced by the citizenry.

Year 22 Day 318: Rather than fall in line with Black Sun's recent requests, Maltha Obex issued a release today announcing that they have formally accepted the more conciliatory terms of a planetary body, and have declared Black Sun a criminal organization on their planet.

Year 22 Day 316: A new treaty was established on Maltha Obex today between governing officials and diplomats from Black Sun; these documents formalize the transition of power to becoming a protected territory of the government, a move largely embraced by the citizenry.