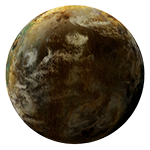 Gand, with its long, stretching deserts and toxic ammonia atmosphere, is far from a hospitable world to most of the sentients of the galaxy. For a time, this hot planet was assumed incapable of sustaining life and, when insectoid creatures were first uncovered deep within the mists, the Republic decided to keep the discovery from the rest of the galaxy. The sentient race that they found, known as the Gand, had thrived for centuries under the cover of brightly colored mists. As no outsider has ever been allowed to fully study the race and its origin, the means of its development in the harsh environment remain a mystery.

Aside from the Gand people, very little resides in the toxic atmosphere. The Meelac, which is an insectoid pack animal suited to survive on the long caravan journeys in the desert's scorching heat, is one of the few other life forms to have evolved on Gand. Very little is known about the Gand origin and it is a mystery in itself how life was able to develop under these circumstances. No outsider has ever been allowed to fully study the Gand race and its origins.

The dense mist that covers the entire planet gives Gand a very peculiar light pattern. The moving gases reflect the light in a variety of ways to give places that are blinding with bright and colored light as well as others that are nearly pitch black. The insectoid eyes of Gand lifeforms make it possible to overcome these drastic changes in light. But even though they are optically best equipped to navigate the mists, Gand still often rely on a strong intuition rather than senses in most aspects of life.

Gand life grew centered around pockets of mist. This characteristic caused the Gand culture to be shaped into a very segmented society comprised of different tribes that had limited interaction with each other. The same segmentation and secrecy that has surrounded Gand in the past still lives on today, giving the planet an inhospitable social structure as well as atmosphere.

From a port inside the Gand ocean evolved the city of Bak'Tana, which is the only haven for the other sentients of the galaxy. Gand is not known for its trading and goods and all traffic goes through this coastal spaceport.