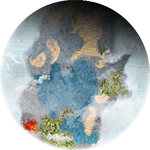 Escher is the capital of Saki I. A southern district of the ecumenopolis, it is also the seat of power for the local government. The main spaceport hub for Saki I lies on a large peninsula extending into the planetary body of water known natively as the Sara Sea, due north from Escher. The city itself is a duracrete wasteland with dense protected pockets of natural forest interspersed. Superstition is ingrained into the emotional and cultural fabric of Saki I. On any given day there may be some thousand rituals and small rites which even the most forward-thinking locals will engage in. Appeasements to local spirits, signs to turn the course of fate, all small acts and beliefs that do not amount to an official religion but a distinct way of life. Theologians and historians alike have tried to trace the origins of these practices, but it was only two hundred years earlier that the native tribes of Saki I converged on the previously untouched jungle-lands of Escher and submitted, seemingly without any show of force, to the rule of a single authority -- the hereditary royal family. With an act of such scale still unexplained, outsiders have little hope of untangling the convoluted and often dark history of Saki I. The Gob`lin royal family rules Saki I as an authoritative government. Lacking any claim to divine right, speech and education are both closely monitored and manipulated to help entrench their position. Visitors to the planet are informed that their rights will be limited, and aliens and natives alike, who are convicted of making disparaging remarks about the monarchy, can be given life sentences. Despite the oppressive rule, locals have shown themselves unlikely to overthrow it. However, when a new royal palace threatened one of the sacred groves within Escher, riots broke out which quickly overwhelmed security forces and claimed several sectors of the city. The street-fighting was only stopped when a favorite princess entered the dark and dangerous pocket of jungle and left significant offerings to the spirits of the grove. The exceptional event was indicative of a typical colonist and their society: change is disparaged and avoided, while rage and revolution comes suddenly and seemingly without cause. More recently, refugees from Sakiya have been allowed to settle in the northern-most desert and glacier region, where their main forest-settlement is known as New Saki. Another place of interest for visitors is the bog found west of Escher. The number of heavy gasses it emits form a mustard-yellow halo over the swamp and make it deathly to most races, but a favorite bathing hole for Gands.