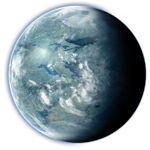 Nimban is a solid planet of average size with a circle orbit around its sun, X-198, of 532 days. The rotation period is 32 hours.

The atmosphere, of several hundred kilometers, is dense and is composed of oxygen and nitrogen. The median temperatures over the continent are steady, though over the oceans the temperatures can fluctuate rapidly. The storms in Nimban are abundant and has an important size, with strong winds and rain. The surface is composed of 85% water and only 15% land. All the land is distributed in the form of a great continent from equator to south pole.

The axial inclination is negligible, so there are no seasons in Nimban. Due to this all the water in the poles are frozen, and the temperatures are constant. The continent has wide and thick jungles in the equator zone, where big reptiles and little mammals lives. Far south the jungle disappears into a vast and dry desert until the great chain of mountains that cross the continent from east to west. In the west of this chain of mountains there is great volcanic activity. After the mountains the weather is colder, with mixed and conifer forests. The mammals are the sole inhabitants of these forests, and have been since the planet was first discovered following the Freedon Nadd uprising

. The only one important city of Nimban is in the east cost, in the boundary between the jungle and the desert, the centre of both residential and industrial complexes, it has a steady economy and a growing number of jobs.