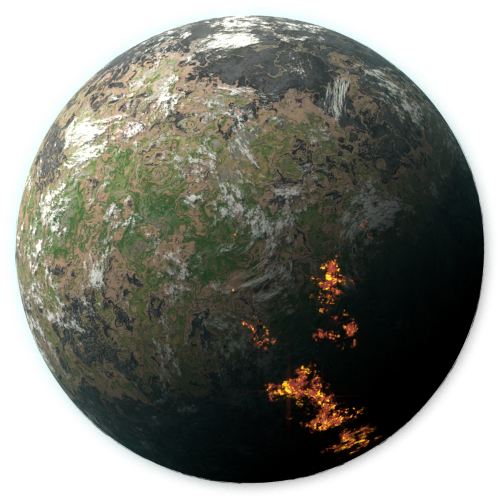 Qiraa is in the Qiraa system and is the homeworld of the Qiraash people. It is a relatively nondescript planet, distinguished only by its hot, year-round temperatures. Erratic weather will bring snow to the northern-most portion of the planet, but it tends to reach the ground only during the coolest portions of the night and rarely survives beyond morning.

Qiraa's atmosphere is breathable and the air is clean, while the majority of its terrain is rock and desert. Within these barren landscapes, there is a unique micro-climate, possibly the result of the variation in altitude and the nearby volcanic activity. It is a semi-tropical zone that divides the equatorial region of the planet north to south. Spread throughout this zone there were once areas of jungle and swamp.

There is a small section of land near the center of the continent that has historically had several major volcanic events, though the last seismographic report about such an occurrence is over a century old. There is also a fair number of lava tubes scattered across the planet, a result of its volcanic roots.

Qiraa has two major cities that both contain starports to receive visitors and export trade goods to the rest of the galaxy. While most of the permanent residents are Qiraash, it has been boasted that every race of the galaxy has touched Qiraa's soil at one time or another. The capital city is Korunaan, located on the equator and once bordered by jungle and rock. Qatalone, the urban center to the south, is fenced on two sides by sporadically active and unstable volcanic areas while jungle and the rugged rocky plains to the north and east were likewise formidable neighbors in the past.

Korunaan has the highest population density of the planet's cities, which works mainly in its industrial and agricultural centers. To the east, large tracts of farmland had long been eyed by developers as a potential expansion of the capital. In addition to its more profitable industries, Korunaan has a thriving cultural district which has nurtured several artists renowned throughout the sector. Korunaan is also where most of the planets resident Qiraash get their schooling through a unique distributed primary education and university system that integrates an incredibly long education cycle of 20 or more years with their various business endeavors. Due to this extensive training, Qiraa's scientists are well-respected and desirable to offworld recruiters.

Qatalone in the south had an aquatic fishing trade based out of the submerged jungle area that once existed to the north that brought good profit to the city. The primary catch was a small, indigenous fish prized by naturopathic dietitians in many systems because it was high in nutrients for its size. Qatalone's most prized export nowadays is an alcoholic beverage distilled from the remains of this very same fish that is sold all throughout the galaxy, though illegal in many systems.

Qatalone is smaller than Korunaan and does not have near as many landmarks, nor attempts at beautification. The local citizenry, however, are content with its construction and architecture, which blends it with the planet -- a world many believe may resemble the Qiraash's long-forgotten original homeworld.