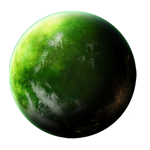 Vorsia Companion is a large moon orbiting a gas giant in the Vorsia system. The surface of the moon was entirely covered in dense woodlands and jungles, however, since the easiest recorded colonisation much of the vegetation has been cleared out to make room for urban development. Though what remains of the jungles still has great impact on the climate, causing high daytime temperatures and significantly colder nights. Prolonged rainy seasons are also common on Vorsia Companion.

Details about the first settlers on the moon are lost to history. The first recorded government of the moon was established by the original Bounty Hunters Guild. It is presumed the cities built between late Year 8 and early Year 9 were constructed by the Guild. After an internal struggle the government of the moon was crippled and the population succumbed to chaos and crime when control was given to the Black Sun syndicate. This was in exchange for assets stolen from the Guild by its former second-in-command Karl Korne. It did not take long for the crime syndicate to gain total control over the moon and establish a new political regime.

It is believed the moon was overseen by former Vigo Tar Alaks, as the only palace on the surface was known as the Vigo's summer retreat. After some time, Black Sun lost interest and the moon's control was sold into private hands, including Aries Rathakar and Anakin Aikinar, respectively. It is unknown what changes the moon underwent; however, population and crime levels remained high during this time. In late Year 11, the control of the highly populated moon was sold to Lilith Delcroix. At that time she was part of the Black Sun Family and so it was easier for her to root out independent crime cells and decrease their activities. However, her efforts were not fully welcomed by the populace. City administrators had enjoyed relative freedom for many years, but Lilith believed a political system with a single figure with absolute authority would be far more effective and efficient.

After a short campaign to establish the new authority the moon enjoyed times of prosperity and stability. Despite orbiting a planet controlled by the Trade Federation, Vorsia Companion remained isolated and had little contact with the system’s government until Year 14 when development expanded into orbit and beyond. Several industrial space stations were built with the cooperation of the Federation to enhance the moon's economy, which prompted the larger government to improve the system's defenses with more military stations. Relationship with the Trade Federation continued to develop until Year 16 when Lilith was discharged from office of Regional Governor. The moon later received further support from the Tion Hegemony government whilst Lilith was the First Lady of Tion between Year 18 and Year 21. When Lilith’s wife Stephanie Barefoot resigned from her role as Lady Hegemon, Vorsian Crown expanded its territories to Morobe system and formed One Nation Under Jou.

The capital of Vorsia Companion is Bloodthrone city, located in the moon's southern hemisphere. The palace, which was once a crime lord’s summer retreat, has been enriched with grandiose golden spires and countless windows, reassembling a cathedral fortress. Today it is the seat of power of the ruling government. The rest of the city contains entertainment centers for its citizens, luxurious skyscrapers and streets filled with statues. It also houses the largest hospital on the moon. The support and resources Countess Lilith was able to secure through her service in larger governments allowed a high standard of living to be common across the vast majority of the moon.