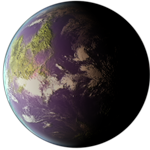 Described as possibly the most idyllic world conceivable, Zeltros boasts what none other would dare: it is the happiest and friendliest planet in the galaxy. Its natives, Zeltrons, have developed a society based on pleasure that leads them to seek entertainment whenever possible and the path of least resistance in all things. To these ends, they have created an existence for themselves which they believe to be absolutely wonderful and they are always willing to share its delights with outsiders. But life on Zeltros has not always been so and the planet has been so changed over its history that its face bears none of the scars from its most turbulent beginning.

Scientists believe that, early in its history, Zeltros was formed like most planets and spun off during the birth of its star. It developed a toxic atmosphere and did not support life, especially with its erratic planetary core that was caused by an extreme elliptical rotation around Zel. At that time, the planet also had two moons with equally erratic behaviors. Specific details about the moons are still full of much speculation, as they were wiped out in a collision with each other which sent them soaring into Zeltros; destabilizing its orbit and reducing its spin. This cataclysm resulted in Zeltros having an almost perfectly circular orbit around its parent star and a merging of the three planetary bodies.

It would take billions of years following the convergence with its moons for Zeltros to lose its roiling fields of magma and develop a breathable atmosphere that enabled the evolution of sentient life. Even as it became less chaotic, archaeological remains show that for many thousands of years, earthquakes frequently tore asunder the fragile societies created by the ancestors of modern-day Zeltrons. It has been suggested that the Zeltrons' intrinsic nature is the result of these tumultuous eras; they tend to view any moment they are spared from tragedy as a joyous time.

When Zeltros finally reached a new age in which its rumblings subsided, its inhabitants used science to make their own drastic modifications to the planet and create an idealistic environment for themselves. The technology used to perfect the planet is lost, but it is apparent that the ancient Zeltrons spared no expense in stabilizing their ecology and their planet's axis of rotation until the seasons on Zeltros melded together, leaving barely any difference between them.

Though its seasons are mild, temperatures on Zeltros do remain below freezing at its northern-most and southern-most points. Humid swamplands lie near the planet's equator and rolling grasslands spotted with deciduous and evergreen forests cover the remaining surface. Many other species have found the planet as ideal as its natives and short visits often become permanent stays. For several centuries, artists from all over the galaxy have been coming to Zeltros to paint its natural beauty; though most would agree that the planet's native population is able to produce works of art which are unrivaled by any other.

If Zeltros' natural beauty wasn't sufficient enough, the Zeltrons, who themselves are considered extremely striking, have also turned its urban centers into veritable playgrounds for any appetite. The cities are sprawling with casinos, theme parks, hotels, brothels, taverns, and other locations for just about every form of entertainment or pleasurable activity. Additionally, the planetary government, which is currently an elective monarchy, encourages and hosts decadent parties in the royal court and elsewhere on the planet. Almost any cause is a valid rationale for throwing extravagant celebrations; whether it's to honor a visiting dignitary or to recognize something as mundane as cleaning up from the last party. For this reason, there are few times when planet-wide festivities are not in full swing. With the planet designed for the enjoyment of all, it has become a tourist attraction whose residents are known for being very social and caring pleasure-seekers; even if it is rumored that some find their pleasure in the lightening of others' pockets.

Over the centuries, there have been off-worlders who have tried to invade and capture beautiful Zeltros and subjugate her natives to use for their own ends. The intruders, however, were unprepared for what some may consider the most unique counter-assault and defense shield in the entire galaxy: once upon the surface and in the Zeltrons' cities, the invading soldiers were assaulted not by blasters and warships, but by the relaxed atmosphere, drinks, and pheromones of the natives. The predilection of the natives toward all things entertaining and sensual has caused more than one invading force to lose the will to fight, which in turn caused the invasion to end in a party rather than a conquest.

Regardless of the desire, as long as it involves pleasure, an outlet can be found somewhere on Zeltros. As it provides for every conceivable amusement, such as a month-long party of gambling, drinking and carousing with the locals, or a relaxing picnic and afternoon painting the gorgeous scenery, the planet has something to offer everyone under its pink-hued skies.