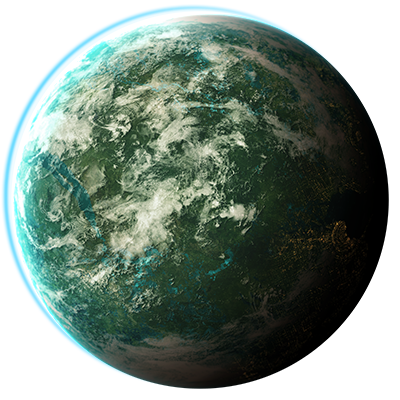 Dagu is an undisturbed planet. Because of the basic components of polarcaps, ocean and jungle, it is a typical example of a breathable and temperate planet. The north and south regions are dominated by two polar-caps with glaciers slowly melting into the ocean. This ocean almost entirely encompasses the central continent, except for the south. There the southern glacier meets the impenetrable jungle that covers the entire mainland. Expeditionary forces usually returned quickly after unsuccessful attempts to enter these dense woods. Reports indicate that the chance of undiscovered lifeforms being present is very likely. The lack of suitable landing zones contributes to this planet remaining unexplored, also because of the immensely thick foliage that prevents scanning from ships flying over the treetops.