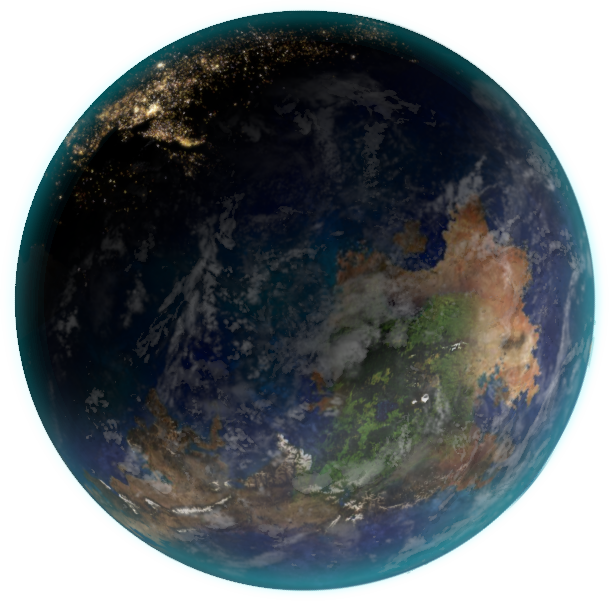 Moroa is a tropical planet with a lush environment and the cultural capital of the Morobe system. Majority of the planet’s surface is covered by a vast ocean surrounding one continent with varied climate zones. The central, largest part of the continent consists of sweeping grasslands with a colder mountain highlands to the east and tropical desert in the northern regions. The only other significant landmass on Moroa is the Silver Chain archipelago located north-east from the continent. Residents of Moroa enjoy a fairly temperate climate all year round as there is little variation between the seasons. The continent is seldom affected by the oceans outside of the annual storm period when the coastal communities are in danger of tidal waves. However, the urban settlement of the oceans has led to massive improvements in early warning systems to combat the potential dangers.

From the earliest days of the system’s colonisation, Moroa was the most favoured planet by the more affluent colonists because its tropical but limited landmass was a valuable commodity. For a long time, Moroa was the least developed planet in the system in terms of urban areas. The focus was not on the number of cities, but the quality of life within each city. As such Moroa always was a popular travel destination and was seen as the paradise world where most colonists aspired to live. This mindset contributed to overdevelopment of the planet in recent years as the system established a central government and more residents were elevated to the upper social class. This urban expansion has significantly reduced Moroa’s historic appeal, but the cities have retained the highest average standard of living in the system.

In the early years of Moroa’s historic settlement, there was discontent between the northern and southern settlers of the continent named Audela. Due to the north being more appealing than the mountainous south, both groups laid claim to the grasslands in between. These conflicts are mostly a thing of the past. However, among the oldest families, the resentment remains despite the prejudice being socially frowned upon and mostly forgotten by the younger generations. The most common prevailing aspect of this past conflict are folktales tied to the swamps at the base of the southern mountains, which are often used to caution children about the highland monsters. A more recent social issue is the class divide between residents living on the continent, who refer to themselves as Audelians, and those from the ocean cities.

Since the establishment of One Nation Under Jou in late Year 21 Moroa has been the financial and political centre of the system, due to being the seat of power of the federal government. Within the capital city Aeranas resides the monarch’s residence, the Illumine Palace, and the Nightwell Cathedral, the centre of the nation’s religion in Morobe. The two landmarks were built on the opposing ends of the city so the first of Morobe’s two suns rises over the palace and the last sun sets over the cathedral. It is a local tradition that no other buildings are allowed to block the sun from reaching the palace or the cathedral. Alongside prominent landmarks and desirable real estate, Moroa also provides ample education and career opportunities, placing it at the forefront of civil developments within the system. Many of Moroa’s residents greatly influence commerce, politics, as well as fashion, music and other social arts.