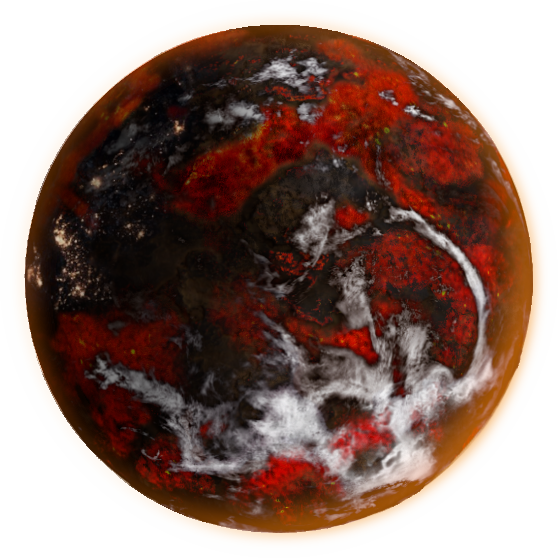 Morta is the smallest planet in the system and the closest to the sun Morobe Minor. The majority of its ashen surface is inhospitable jagged plains, shaped by lava oceans and rivers. Tall mountains surrounding a desert plateau form the only continent that is habitable. Although the mountain ranges provide some protection from the lava oceans, the lack of atmosphere makes the surface outside of cities with a controlled environment unbreathable for most species without protective gear.

There are no records of inhabitants prior to the colonisation of the system in recent years and it took significant investment and effort by the controlling corporation to create liveable conditions on Morta. The main reason for settlement of the volcanic planet was the unique mining opportunities not found elsewhere in the system. Cities were developed within and on the mountain ranges, creating an industrial complex where minerals and raw materials from the mines and lava shores are processed. Between Year 14 and Year 16, Morta played a significant role in supplying shipyards of Sienar Fleet Systems (the second iteration), the dominant corporation in the system during that period.

As the shipwright infrastructure developed in the system, the desert plateau turned into a centre of commerce. Tor Aashrur city developed a seedy reputation for welcoming traders, smugglers and bounty hunters alike, despite being the least likely tourist destination, or perhaps because of it. Citizens of One Nation are not encouraged to pursue bounty hunting as a profession, the culture of higher society aims to build people up, not hunt them for profit, however, the rough residents of Morta tend to take whatever jobs they can get.

Despite the best engineering efforts, Morta’s proximity to one of the suns makes any prolonged stay on the shores of the mountainous landmass, locally known as Zadros, uncomfortable even in the environmentally controlled cities. Because of this, there is a frequent flux of people moving in and out of Tor Aashrur, looking for a respite from the arid mountain cities. Morta’s permanent population is significantly smaller in comparison to the number of people travelling there for work from other planets in the system. The permanent residents are mostly those of species that do not find the hot, arid environment problematic and those that do not have a choice. Precisely because of its hostile surface, Morta houses the largest prison complex in the Morobe system.

The combination of these factors led to a mixed, mostly unfavourable, reputation among the system’s population. Morta is not seen as a planet wanted to be visited for pleasure or as an aspiring place of residence or work. The common stereotype is that mines of Morta are destined for the least skilled labourers, and Morta is often associated with expletive expressions in reference to its hellish landscape. This dreary outlook is in stark contrast to the more developed planets in the system. Life on Morta is considered to be more about survival than living. This led to a fascinating split among the residents when One Nation Under Jou was formed in Year 21. Many residents are skeptical of the government's ability to deliver on its promises to make their lives easier, but some of the most devout and fervent believers of the nation’s religion are found on Morta because they want to believe that through the tenants of the faith, Morta can become a better place to live.