The Geonosian Massiff is a large canine-like reptile native to the planet of Geonosis. Archaeological records indicate that these creatures were domesticated in a very similar fashion to many canid species on other worlds.

Over the centuries, massiffs have served numerous roles in Geonosian hives, ranging from light beasts of burden to implements of war. Owing to their ferocious countenance and keen senses, they were often employed as guard animals or sentries. Within Geonosian society, possession of a massiff is often a mark of status and authority. Ownership of these animals was historically reserved for the aristocracy and used as tools of intimidation or to scent out rebellious members of a hive.

The Old Republic experimented with using Geonosian massiffs as supplements to clone scout troops. A number of the animals were brought off-world and assigned to troopers with the Advanced Recon Force.

After the fall of the republic, these units were transferred to Jedi hunting duty under the new Imperial military command. However, while capable of tracking Jedi by scent, both animals and handlers often lacked defense against Force manipulation. As a result, use of Geonosian massiffs fell out of favor; supplanted by technological alternatives. 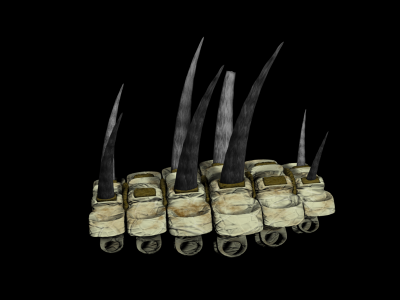