The GNK Power Droid, often referred to as the "gonk" droid is a mobile power generation unit commonly found in ship hangars, vehicle garages, repulsor pools or wherever a permanent power grid is unavailable or inconvenient. This model is often mistaken for the EG6 Power Droid designed by Veril Line Systems. However, the "gonk" droid is more rectangular in shape and is built on a slightly more advanced mobility platform.

In spite of a rudimentary power train and a simplistic artificial intelligence unit, the GNK remains one of the most popular offerings in the Industrial Automaton product line. In fact, it is so ubiquitous and rugged, that functioning models have been found abandoned in long closed mine shafts and wandering unsupervised among the ruins of deserted colony planets. Additional features include power plug-in sockets, diagnostic scanners and a retractable manipulator. Protected by a heavily armored exterior, these droids were built to survive extremely high temperatures, huge energy shocks and even a radiation conduit breach. Unlike droids with more sophisticated intelligence units, the GNK does not require a memory wipe following extended periods of isolation.

Many military organizations use the GNK droid as a cost effective means of powering support equipment. However, the unit's slow movement speed and inherent awkwardness usually bar it from use among front line troops.

Another remarkable feature of this walking battery is the use of a unique form of droid speak known as Gonkian. Very few sentients bother to learn the meaning of these low honking sounds. Because of this, numerous rumors and superstitions surround the droid. One popular folktale involves a pair of "gonk" droids which travel the galaxy soliciting donations for a mysterious religious organization known as the "Cult of the Power Droid." Another suggest that there is only one GNK and that it is capable of traveling anywhere in time and space. 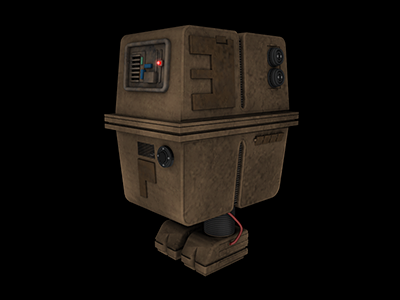