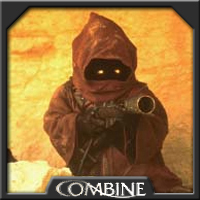 Native to the desert planet Tatooine, Jawas are intelligent, rodent-like scavengers, obsessed with collecting outmoded and abandoned hardware. About a meter tall, they wear rough-woven, homespun cloaks and hoods to shield them from the hostile rays of Tatooine's twin suns. Usually only bright, glowing eyes shine from beneath the dark confines of a Jawa hood; few have ever seen what hides within the shadowed garments. One thing is certain; to other races the smell of a Jawa is unpleasant and more than slightly offensive.

Jawas understand the common language of the Empire, but prefer their natural tongue, a jabbering of low, guttural croaks and hisses intelligible to most inhabitants of Tatooine - at least to those who must deal with them. Jawas also speak a strange, variable dialect of their language that is incomprehensible to non-Jawas; this greatly aids their ability to bargain with outsiders. Moisture farmers often learn the hard way that it is safer to deal with one Jawa than to negotiate with a Jawa committee.

Jawas roam the desert world of Tatooine, collecting abandoned Droids, broken machinery, and any other scraps of advanced technology they find. They travel in enormous, treaded fortress-homes called 'sandcrawlers,' scouring the endless wastes in search of salvage. These migrant mechanics are basically high-tech junk dealers who gather things people throw away and sell them to others. They have even been known to take equipment off a moisture farmer's hands -- especially if it's not guarded or securely locked in place. After a few weeks of rewiring and alterations, these wheeler-dealers may even attempt to sell the equipment back to the original owner -- at a substantial profit, of course. (Most races would consider this treachery and stealing; Jawas consider it good business.)

Jawas are inherently paranoid and fear everything, but apparently have but two natural enemies: Sand people and Krayt Dragons. Sand People are reluctant to attack anything as large as a sandcrawler, but constantly seek opportunities to raid Jawa scavenging parties that wander too far from the mobile fortresses. Krayt Dragons have no such qualms and have been known to attack the giant land vehicles on various occasions.

Though cowards, if pushed too far, Jawas will use their weapons: blasters of their own design, pieced together from parts of a wide variety of mechanical sources. Reports also exist of entire moisture farms being flattened by sandcrawlers. Whether these rare incidents are accidental occurrences or some form of retribution is unknown, but most Jawas would rather scurry away than fight.

In the few cities that rise out of the Tatooine wastes, Jawas can be found excitedly fawning over the vast concentration of vehicles and Droids found there. Often their fear gives way to their obsessive tendencies in the presence of so much high-technology and the creatures must be forcibly and repeatedly frightened away. Many visitors complain of emerging from a cantina to find dozens of Jawas scurrying over their newly polished landspeeders, pawing and drooling disgustingly.

Despite appearances however, Jawas are accomplished repairmen with an innate knack for analyzing machinery. They may not understand robotic theory or repulsorlift engines, but they can get a malfunctioning Droid to work or an unresponsive landspeeder to operate -- at least long enough to sell it to a desperate moisture farmer. Jawas take no interest in local or far-ranging politics (and probably wouldn't be allowed to if they did) and have shown no inclination toward either the Rebellion or the Empire. Their only interests lie in making deals and acquiring more of their precious technology.