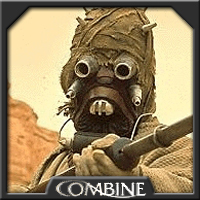 Most often referred to as Sandpeople, these nomadic desert inhabitants on Tatooine roam the Jundland Wastes, where they are often called Tusken Raiders because of their notable attack against the human settlement at Fort Tusken. The Sand People have had a deep hatred for humanity. They dress in heavy cloth robes, and have covered their heads with strips of cloth to hold a breath mask and eye protection on.

They have learned how to train the banthas native to Tatooine as mounts, and a marauding group of Tuskens will ride them single file, to hide their numbers. Each raider works with the same bantha for life. When a raider's mount is killed or dies, the raider is left to wander the desert alone. If the bantha's spirit deems it so, the raider will be befriended by another bantha. Otherwise, the raider will die in the sands. On the other hand, if a Tusken is killed or dies, its bantha is turned out into the desert.

Although the Sand People are aggressive and violent by nature, they have deep-seated traditions that they cling to tightly. Young raiders are required to prove their adulthood in various physical activities, the hardest of which is the manhood ritual of hunting down a krayt dragon. While the Sand People have no written language, the most revered member of a Tusken clan is the storyteller. He knows the life-story of every member of his clan, and also knows of the clan's history. The storyteller is required to memorize the histories word-for-word, eliminating any chance for misinterpretation or distortion. Apprentice storytellers often are more hard-pressed to prove themselves than warriors, for a single mistake in reciting the histories means instant death. As violent as their nature is, Sand People stay as far from the moisture farmers as the farmers do them. There are occasional attacks on the more outlying settlements.

A few scientists have claimed the Tuskens have human origins, but the autopsies done on what little dead they leave behind have revealed distinctly engineered eyes and other non-human characteristics.