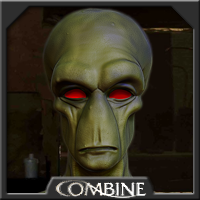 Though humanoid in form and stature, the Duros are easily recognized by their bulbous red eyes and prominent bald heads. They have only thin slits for mouths, and their rubbery facial skin begins to wrinkle as soon as they reach adulthood. Typical complexions can range in hue from a very dark blue to faded turquoise, and give off a faintly moist sheen in good health. No visible nasal formations or 'ears' are present on Duros of either sex: olfactory glands are hidden in fine folds beneath the eyes. Females of the species are chiefly distinguishable by their taller, more willowy build. Although cold-blooded by nature, Duros give birth to live young, and it is customary for bonded pairs to care for their own offspring from the neonatal larval stage on into adulthood.

One of the earliest races in the galaxy to take to the stars, the Duros have a long history, and may express quite a justifiable amount of pride about their civilization's accomplishments. Introduced to space technology many millenia ago while enslaved by the legendary Infinite Empire, the Duros eventually rebelled to form their own planetary monarchy. Later they would work closely with the Corellians to invent hyperspace cannon technology, an essential precursor to the on-board navigation systems of the present era, and go on to become one of the founding powers of the early Republic.

As their single-minded focus on the space industry eventually created terrible pollution on their homeworld, Duro, the majority of the Duros moved long ago to floating city-stations and industrial centers orbiting the planet. Conscientious recycling efforts and advanced terraforming techniques, perfected over thousands of years, eventually managed to reverse much of the damage, and agriculture as well as urban development has once again become feasible on Duro's surface. Nevertheless, a significant percentage of Duros still claim they feel most comfortable living in the stations and shipyards which cluster thickly about their temperate world.

The most venerable institution in Duro's orbit, the Academy of Deep Space Exploration, has been training both male and female Duros to seek their fortunes in the galactic economy for millennia. Graduates of the Academy are famous for their ability to make accurate interstellar jumps even when provided with poor charts and limited information, having perfected a seeming sixth sense for bringing ships safely in and out of hyperspace. Because of this, and because of their galaxy-wide reputation as calm, reliable workers, Duros are especially valued in ship production enterprises and sought-after as interstellar pilots.

Duros can also make uniquely reliable lending partners, for in certain levels of Duros society any failure to stick to the formal terms of a loan agreement can damage an individual's reputation for life. It should be noted, however, that exceptions to the Duros' generally tolerant nature vis-à-vis other species do exist. While genetic testing has long since proven that they share a common ancestor with Nemodians, many Duros still refuse to recognize the relationship, and consider calling an individual a 'Nemodian' the direst of insults.

With their photographic memories, some Duros also choose to become extraordinary storytellers, renowned galaxy-wide for their ability to learn a wide range of narratives by heart, and perform them all with stunning accuracy. Tales of daring escapes and strange discoveries in the blackness of unexplored space, recorded for posterity by iconic masters of the craft, remain classics on the galactic holonet to this day. The native Duros language is Durese, or Durosian, though most individuals who travel off-world are also fluent in Basic, a required subject of study at the Academy. Spoken Durosian can be found in use by spacers and traders galaxy wide, and in academic circles off of Duro at least, is commonly accepted as ancestral to the Nemodian language PakPak.