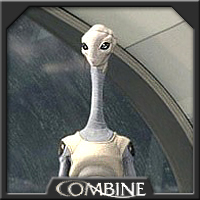 This alien race is native to the planet Kamino. The average Kaminoan is a tall, thin being with pale skin and a small, knob-like skull. The male of the species has a thin ridge encircling their heads, which the females do not display. Their almond-shaped eyes can see in a variety of spectra beyond that of visible light. The Kaminoans are aloof in nature, preferring to remain isolated and keeping to themselves.

The species is an evolution from aquatic creatures in the vast oceans of Kamino was reflected in their tall shape, glassy coated eyes, near luminescent skin and thin long necks. There were many peculiarities about the particulars of Kaminoan physiology: rear-articulated legs, once adapted for firm seabeds, eventually only saw use in the hallways of their science facilities, while only male Kaminoans exhibited fin ridges along the rear of their small, bulbous skulls. The almond-shaped eyes of Kaminoans perceived a wide spectrum of light, from murky conditions to the ultraviolet range. This ability resulted in decor that, while austere to Human eyes, was more elaborate than it seemed.

The Kaminoans are considered to be one of the most adept species in the creation of clones, although very few beings in the galaxy at large even know of the existence of the Kaminoans. The Kaminoans have been developing and perfecting cloning technology for many centuries prior to the Clone Wars. It is widely believed that their aloof nature is due, in part, to the genetic manipulation of the Kaminoan gene pool, which has kept the race vital without sacrificing individuality. Many beings speculate that the Kaminoans are cloned, rather than created by natural reproduction and the fact that their native planet has no landmasses is further evidence to force these beliefs.

After the disastrous end of an ice age on Kamino known as the Great Flood, Kaminoan society was pushed to the brink of extinction. Only through the development of a mastery over selective breeding, genetics and cloning were the Kaminoans able to survive. The calculating instincts of survival required of the Kaminoans produced heavy marks upon their late form culture. Kaminoans were minimalist in their designs and lifestyle, and were fierce perfectionists to the point of intolerance. The impact of the harsh adaptations the Kaminoans were subjected to is also viewable in their inward focus and isolationism. Kaminoans focused on little else than their cloning and interacted with offworlders as little as possible.

It was with great trepidation, therefore, that the Kaminoans began to offer their cloning services and genetic proficiency in exchange for essential imports. The select few clients that received the work of Kaminoan geneticists received perfect clones to suit their needs. The Kaminoans took great pride in their scientific breakthroughs, but gave little thought to the ethics of their work or the consequences of their deployment. While Kamino-made clones slaved away in the mining colonies of Subterrel or the private armies of intergalactic mercenaries, the Kaminoans thought nothing of it, continuing to toil at gaining more scientific honor. The earmark of a high-ranking officer on Kamino was thick, black cuffs on the sleeves of their tight white uniforms; the wider the cuff, the higher the rank.