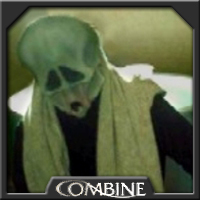 The Givin are a skeletal looking race that live on the harsh planet Yag`Dhul. Due to a complex lunar orbit the 3 moons of Yag`Dhul at times push the atmosphere off of certain areas of the planet leaving those areas open to the hard airless vacuum of space. To combat this the Givin developed an exoskeleton that would allow them to survive in a vacuum for a short time. The Givin exoskeleton is bone white and looks like a skeleton that was perhaps dipped in a mild acid until it started to melt a little before being allowed to harden again. The Givin stand about 1.6 to 1.8 meters tall, have no hair and pure black eyes.

The Givin have a very structured society based on complex mathematics; developed by necessity to predict the raging tides and atmospheric changes caused by their world's three moons. The few cities the Givin have are hermetically sealed so that if the atmosphere in those areas does go the cities are still safe. Givin language is an odd mixture of basic and math so that even the simplest sentence will oftentimes end up sounding like a complicated calculus problem to the unskilled listener.

The Givin are known to be some of the best ship builders in the galaxy, though modifications typically have to be made on any ships outsiders purchase from them, since Givin tend to plot hyperspace jumps in their head, so they don`t need navcomps, in addition to the lack of pressurized areas throughout much of the ship.