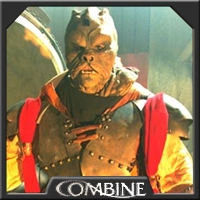 The Klatooinians are tall, humanoid beings. Their skin is rough, with color ranging from olive green to dark brown. They have a flat nose and a canine muzzle, with dark eyes under their thick heavy brows. The severe desert climate of their homeworld has made their species strong and enduring. To survive in their hostile world was a mark of great physical and mental strength. That is why the Klatoonians respect and admire the elderly and experienced of their kind.

The Klatooinians are a proud people and are traditionalists, used to following the traditions laid by their ancestors. They also have a strong religious upbringing, that can tie them down, as a species or a clan, to another entity, be it a Hutt or a crime syndicate or even a governing faction. When a Klatooinian makes a vow, you can rest assured that he will do anything in his power to complete their vow. But you can also be assured that if a Klatooinian ever vowed to kill you, you will be hunted till the Klatooinian or you had been killed. Thus is the way of their species.

This religious steadfast pride and loyalty, coupled with their strong statures, has made the Klatooinians ideal for guard duty, since anyone with an ounce of intelligence would think twice about trying to rush a Klatooinian. They have been a favorite to crime syndicates and Hutts for their steadfast loyalty, and you would never have to think twice about them if they made a vow.