The System Satellite (Sysat) T-20 was originally created by a team of scientists and engineers for the Galactic Society for the Study of Pre-Space Faring Beings (GSSPSFG). It was designed as an affordable way to allow scientists to monitor the species of worlds that had yet to achieve a level of technology enough to join, or even become aware of, the galactic community at large. At the same time, it had to be cost efficient enough to allow the deployment of units to orbit worlds all over the galaxy. It served for several decades in its intended role, gathering data and remotely monitoring many species, some of whom would later become a part of the galactic community.

From the early design phase, the T-20 was designed with production costs in mind; it was built using readily available components and technologies that, while functional, were seeing less frequent use in more cutting-edge satellites. Among the most notable uses of frugal equipment were the fitting of non-rotating solar arrays and a sensor suite that was sufficient only to cover the area immediately surrounding the planets they were usually deployed over.

In recent years, the T-20 has seen a resurgence in its popularity. Following the Clone Wars and the dissolution of the Society for the Study of Pre-Space Fairing Beings, the schematics of the system became widely available. While mostly obsolete by today's standards, it remains popular with groups on a budget. They are still a common sight over some worlds, used by local media outlets to transmit information planet-wide, and see some use among pirate groups who deploy them along common trade routes hoping to spot easy prey. Despite a large number of more modern options, the T-20 is likely to remain in use for many years to come. Presently, the Sysat T-20 represents the galaxy's standard in reconnaissance satellite systems, as it provides a highly mobile, survivable surveillance and command and control platform. Each carries a 3 meter-diameter umbrella-like HandEye™ reflecting dish to collect carrier signals from almost anywhere in the Galaxy.

Constellations of T-20 satellites are often used in disputed systems to monitor and report on sovereign space or treaty violations. This practice - commonly referred to as 'satellite seeding' - entails dispersing twenty-five T-20 satellites in checker-board fashion across a system. Select governments are rumored to be sponsoring R&D into a prototype version of the T-20 (code named the X-28) for pirate baiting operations. Leaked reports suggesting that the secretive Bantha Works Research Station have equipped these prototypes with False-Front™ projectors have neither been confirmed nor denied by public spokesmen. False-Front™ is suspected to allow military satellites to appear as freighters/capital ships on scanners of passing ships, luring unsuspecting pirates into an ambush by law enforcement agencies. 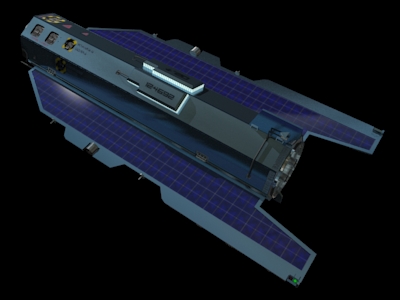