For the more militaristic type, holoprojectors serve a much more ominous role, though it is little known that holoprojectors are wide spread on the battlefield. It is said that although one may have many commanders in the field, they are all receiving orders from one general, and this is made possible by the holoprojector. Holoprojectors allow a single general to command an entire battle from the safety of an orbiting starship because the holoprojector allow him to see in depth 3-D maps of the entire battlefield, including all troop movements. Couple this to the ability of ground commanders to carry small holoprojectors, and you have a highly informed tactical group. The commander has the ability to pinpoint exactly where he wants his ground troops on a map, and then send that map to ground commanders to make it happen.
« Back To Top 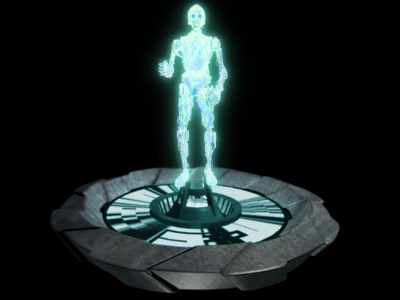