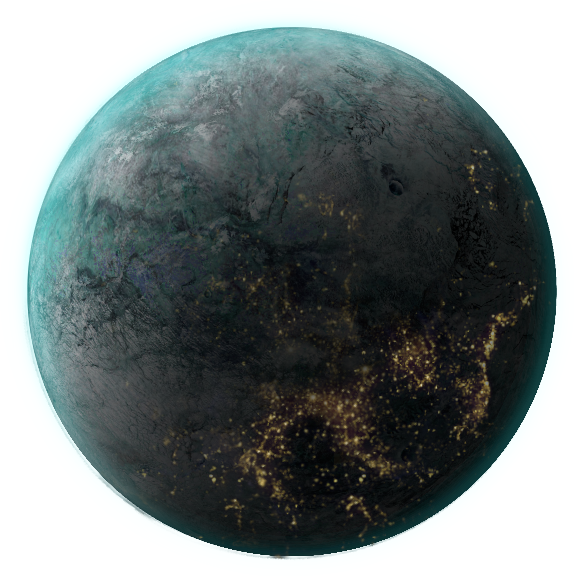 Morabora is the largest planet in the Morobe system and in the most recent years the most populous planet despite its predominantly inhospitable frozen environment. Although daytime temperatures are survivable by many species, Morabora’s toxic atmosphere makes it impossible for most to survive outside of the cities without protective gear.

The majority of Morabora’s surface are vast glacier plains of frozen oceans, sporadically broken up by mountains that pierce through the ice, and craters left behind by ancient meteor impacts. As the planet has no moons to influence the oceans beneath the ice, the surface of the planet is relatively stable with no major shifts in the landscape. This lack of seismic activity was a major contributing factor for the settlement of the planet, alongside the fact that the boundless and featureless frozen plains provided an easy-to-develop foundation for the colonists. The toxicity of the atmosphere was not a concern thanks to environmentally protected cities.

By the time the system was rediscovered and colonised in Year 14, Morabora had sufficient population centres concentrated around the prominent mountains that offered the most protection against the elements. This allowed for a relatively easy transition to an ecumenopolis as there was no environmental preservation to consider. Thanks to this extensive planetary development, the population is safe from the icy weather patterns, or at least for as long as the city life-support systems are maintained.

Morabora is the home to the vast majority of the system’s residents, which is reflected in the planet’s infrastructure. The ecumenopolis was predominantly developed with residential areas to house the population and to provide citizens with places of work, entertainment and the means to travel to the other planets within the system. The most luxurious properties are situated around the mountains and craters, especially those that feature natural hot springs. The planetary government is located on the largest mountain known as Misthold.

Morabora does not have any typical farms as the freezing climate does not allow for agriculture outside of environmentally-controlled greenhouses. Because of this, the planet has little to no local natural food production, mostly relying on factory-produced foods and imports. This had the unforeseen effect of local crime being centred around food and making protection of these imports the priority for local authorities.

There is a notable lack of fauna on the planet. Dangerous predators that evolved in the icy environment were hunted to extinction and docile creatures lost their habitats because of urban development. These days only rare cave-dwelling creatures can be still occasionally seen. It is speculated there are fish deep under the ice but its thickness has not made this scientific enquiry practical.