In terms of strategy and management, the T-series Tactical Droid was created as a more reliable alternative to the B1 Battle Droid and B2 Super Battle Droid. This was demonstrated in testing by their competent command of forces, from squads to entire fleets. As with most other military droids, they were designed to have varying paint schemes to signify rank.

Despite each unit bearing a moderately different voice and personality, the T-series has a reputation for always being bossy and arrogant when going about most tasks. This leads the droid to speak down to others as if they were inferior. It has even caused individual T-series to issue contradicting orders, yielding confusion in the droids performing the tasks and resulting in the Tactical Droid belittling their underlings further.

Regardless of any shortcomings that the droid may have, it has seen active duty with many military and para-military organizations throughout the galaxy. Often replacing more expensive military droids as cheaper, but intelligent alternatives. 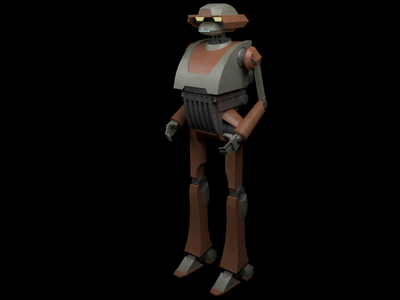