The FN-D0 series of military droids was developed with one thing in mind – the silent killing of enemy leadership figures. To accomplish this, the droid’s designers utilized state-of-the-art motor control interfaces, top-of-the-line servomotors, and cutting-edge stealth technology to produce a droid capable of slipping past the tightest security to carry out its mission. The FN-D0’s slender, humanoid frame incorporates a fine network of hibridium fibers to trick active scanners, while its locomotion is almost totally silent thanks to its precision engineering.

The assassin droid incorporates highly sensitive visual and auditory sensors in its cranial unit. The cameras housed behind the central red lens in its “face” are able to see into the infra-red and ultra-violet spectra. Similarly, the droid is capable of hearing both infra-sound and ultra-sound beyond frequencies detectable to most sentient species. To assist in moving through small gaps, the droid’s elbow and knee joints can move a full three hundred sixty degrees while its shoulder and hip joint are almost as flexible. The droid boasts finely tuned manipulator hands that can mimic the range of motion of most sentient races, while its two deceptively spindly legs can propel the droid at speeds of up to forty kilometers per hour and jump up to ten meters horizontally. The droid’s weapons are a pair of retractable vibroblades housed in its forearms. When required, the thirty-centimeter-long blades can be deployed in a fraction of a second. The droid can use these blades with the skill of an accomplished swordsman and can stab with them quite powerfully.

Casual observation will reveal a number of design features with the BN-D0 series assassin droids developed by the Twilight Foundation for similar duties. However, the designers claim this is simply a case of convergent thinking and not any conscious effort to copy an established, successful design. 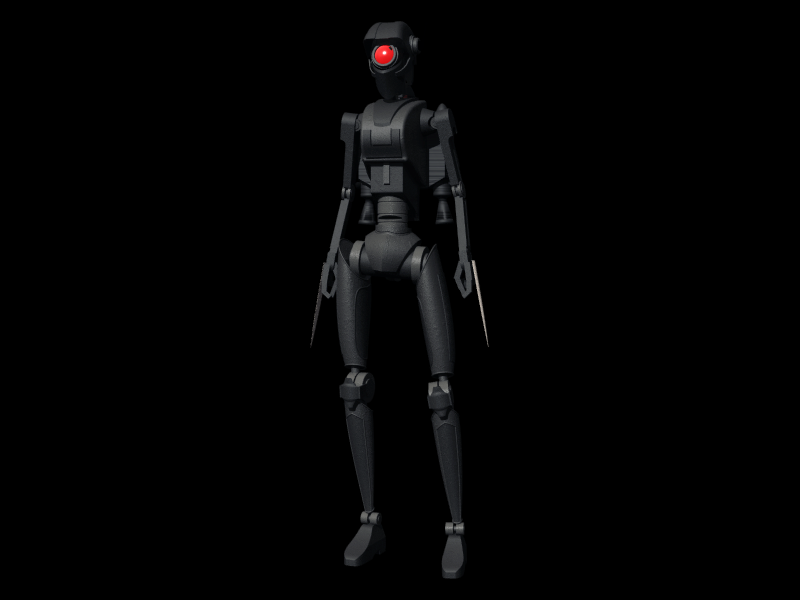